The Novato Fire District was formed in 1926 following a request by the residents living in a 71 square mile area around the community of Novato. The Marin County Board of Supervisors established a commission on July 6, 1926 to oversee the organization. The District’s first commissioners were W. E. Cole, Chairman, L. Nave, Vice Chairman, and Dr. W. H. Busher, Secretary. Charles Kiser was appointed the first Fire Chief. 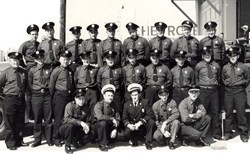 The first fire station was built at the intersection of Grant Avenue and Redwood Boulevard, which at the time was Highway 101.

The first fire engine was a 1923 Model T Ford. It was outfitted with a chemical tank, which was replaced one year later with a 160 gallon water tank and a small pump. The conversion was done by a local blacksmith whose shop on Grant Avenue is now known as Dr. Insomnia’s. The Model T was in service until 1939 when it was replaced by a 1938 Dodge Power Wagon. 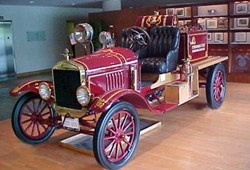 The Model T was sold to a Sonoma County dairy, then resold to Bob Crandel, whose father was one of the original Novato Fire Volunteers in 1933. In 1976, the Model T was purchased by a Novato Fire District firefighter, Gene Fox. It has been owned by a Fireman’s Fund executive, has been restored, and was on display at the Fireman’s Fund Insurance Company headquarters in Novato. It was donated to the Novato Fire District for preservation in late 2015.