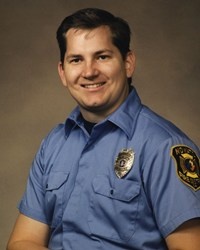 Steven L. Rucker, age 38, was an 11 year veteran of Novato Fire District. He began his career as a Firefighter/Paramedic in 1992. Steve had previously worked as a paramedic with American Medical Response in Concord, California.

Steve promoted to Engineer in 2003 and served as an Acting Captain. He was in charge of the District Easter party, and was the Chief Elf in the District Toys for Tots program. Steve also participated in the “People Helping People” program, assisting senior citizens reduce fire hazards around their home. Steve is survived by his wife Cathy and two children.

Fire chief George Cavallero, who died of a heart attack in 1969 going out on a call. Cavallero died on his 51st birthday while responding to the fire that gutted the old Burdell Mansion at what later became Olompali State Park.

The Chief made a habit of checking in at both of the District's two stations to wish his troops a pleasant night before he went home for the evening.